TERASKIN -State of the Art technology in a Single Gesture 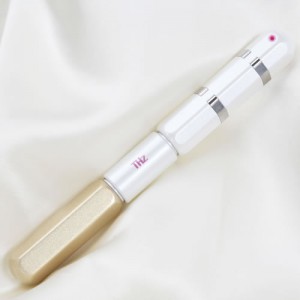 TERASKIN prepares your skin to absorb active ingredients.  An ergonomic, rotating double-ended probe of  Terahertz Waves and Ion Micro-currents.  Terahertz generator has a global patent.  Needs no batteries, or any other power supply being self generating and ECO- FRIENDLY.  Recommended for use on Face and Body.

WHAT ARE TERAHERTZ WAVES ?

They are broad eletro-magnetic waves . On the frequency spectrum, Terahertz Waves – with wavelengths between 1 millimeter – 100 micrometers (0.1 -100THz) puts the terahertz waves between long-wavelength infra-red and short-wavelength microwave radiation.  Like infra-red and microwaves, Terahertz waves travel in straight lines, are non-ionizing, safe and non-radio active.  Terahertz can travel through a variety of non-conducting materials, including clothing… more effectively than infra-red … but not metal, or water.  They can penetrate your skin quickly and deeply, often being used in medical application.

WHAT EFFECTS DO THEY PRODUCE ?

They are particles, made up of groups of atoms, which have lost or picked up one or more electrons, respectively aquiring a positive , or negative electrical charge. They are absorbed through the skin and are indispensable for life.

HOW DOES THE MICRO-GENERATAOR WORK ?

WHAT EFFECTS DO THEY PRODUCE ?